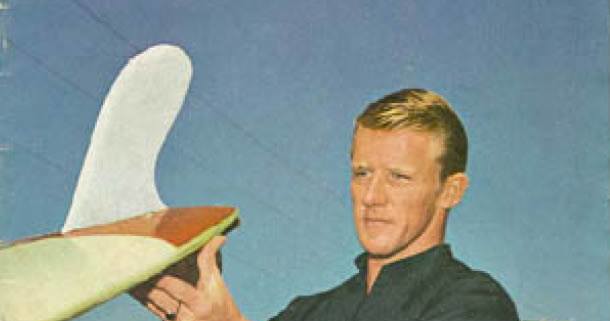 So what went wrong?

While history gives much of the credit to Bob McTavish and Nat Young,

Surf Industry is quite important.

Kevin “Platty” Platt was a war baby born in 1944. His parents Lance and

Gene were ballroom dancers as a hobby. Kevin was an only child and is

remembered to be close to Lance and Gene.

at her Northern Beaches home in Sydney.

at the time. Kevin attended university for a couple of years but stopped

when board shorts took off.

Setting up a surfshop on Pittwater Rd, Dee Why was very pioneering at

moving out of the kitchen and into the big time.

Bob McTavish was one who was close to Kevin, “Platty was quietly spoken

but with a wicked sense of humor. He loved the Goon Show and was

always mimicking the characters, a really fun guy to be around”.

in Hawaii in the Winter of 1963. One of the classic movies starring Kevin

surfing with his hands low, feet close together and was one of the crew who

was a super clean trimmer.

Platt migrated north to Sunshine Coast to shape at Hayden’s then Cords in 1966.

Those close to Platt, figured the move north to Noosa was a chance to cut the

apron string from his mother, Gene 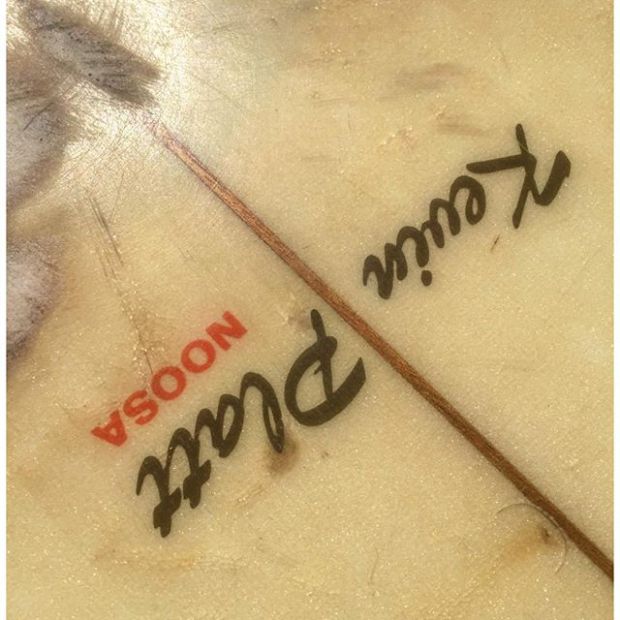 things different to the boards of this era.

The boards moved away from the traditional rails which were more 50/50.

The rails on a Kevin Platt Surfboard had a harder bottom edge, the same as

the boards we ride today. Feel the rail of one of Kevin’s early boards and

he was on a track to the future.

square. They were truely ahead of their time.

sell the surf shop in Dee Why and follow her only son north, buying a house

of food for the time.

“You have to remember it was Noosa in the late 60’s. Gene was cooking slushy

food when we were all going Vegie. It didn’t do too well”.

Like many surfers of the era, the arrival of drugs contributed to the downfall

of Kevin Platt. This was a time where we lost a generation of great and talented

or two, the concept of brotherhood flowed strong with Platty but this was a time

when the hippie era was slowly drawing to a close.

A friend of Kevins at the time and Noosa local Richard  remembers,

“I was surfing at Noosa when Kevin asked me to come glass for him.

I needed to make a few dollars so thought why not.

a handful of purple pills. He offered me one but it wasn’t my thing”.

Even through this time Platty was making some cutting edge surfcraft.

Kevin Platt was soon to marry his first wife Suzie as McTavish explains,

built a house together on the edge of the National Park. The house was

formerly a sawmill so the rooms were huge”.

Kevin soon sold the house and built another house at Sunshine. It may have

all the time he was doing the dance with drugs.

out of Noosa. Kevin later descended into alcoholism and spent most of his time

drinking with his Dad Lance at Cabarita Sports Club. Sadly this saw the money

he had made, disappear into the bottle.

wife cheating so he backed a concrete truck up to the bedroom window and filled it up”.

Sadly for Kevin his Father Lance died then Gene followed. Many who knew her

from the early days were sad that she had became bitter and grumpy. The funerals

were simple and reportedly attend by few, however Gene could easily be remembered

as a pioneer in Australian surfing, much like Isobel Latham.

Bob McTavish, one who was there with Platty through the early years, through to

the Noosa years sums it all up.

Kevin was a kind and intelligent man, experimental in surfboard design and a

thoughtful person but he had an addictive personality. I feel like he spent his life

trying to escape Gene. I love and miss him, our good mate Platty”.

Writers Note: Many thanks to the great Bob McTavish for his honest

and thoughtful memories of Kevin, Gene and Lance Platt. Thanks to

Richard  for his memories of working with Kevin at Noosa. Kevin doesn’t

to what would become a multi billion dollar industry. In researching

this article is it clear, if you knew Kevin, you loved him like a brother.